In the case presented today, pilot B adopts an optimal transition speed. This speed, as has retained the assiduous and attentive reader, varies with altitude between best glide speed and a bit faster than McCready speed, which in turn is determined by the expected climb rate climb in the next thermal. But as the pilot B has not read the good book and I need to simplify my equations, we will assume that he flies at a constant speed, that is the McCready speed. 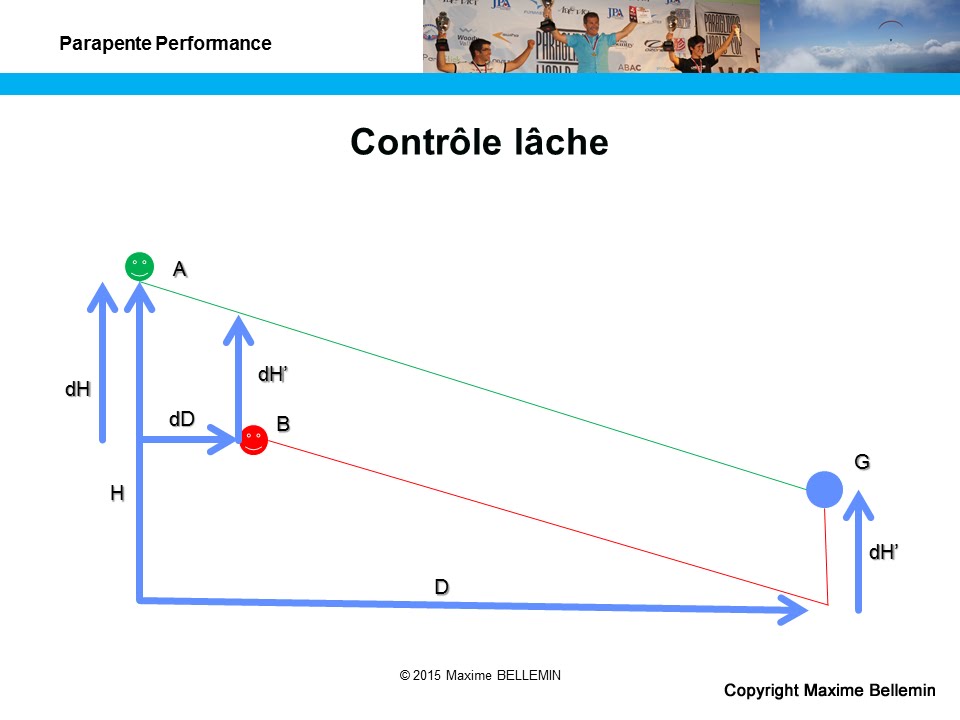 Pilot A drops a bit the bridle and does not want to fly with the gas pedal to the floor. He will fly also at McCready speed and allow to pilot B the opportunity to catch a thermal that A pilot wishes to join just above his fellow pilot.

In a rational world, both pilots will therefore slide down parallel slopes at the speed McCready and B will go up a thermal at the expected McCready climb rate to a G point. Pilot A will join him on direct glide.

The beauty of the formula is such that it can also be applied dynamically from floor to thermal top by exploiting the principle of Cochrane index for the optimal speed. At thermal tops, cruising slightly faster than McCready speed, pilot A uses a control angle rather steep. Close to the ground, by cruising at best glide speed or lower, pilot A uses a rather flat control angle.

Moreover, in the case described here, the range of control may seem endless because it is not possible to calculate it. In fact it is determined by the conditions and the terrain: as soon as B finds the thermal at expected Vzmc, the control will end or be greatly reduced.

Tomorrow we will have the opportunity to generalize the problem of control.