Let’s stick to english for some more posts. That shall help me not to let emotions go through my words for the time being and to give a bit of fresh air to this blog. To write in a light mood, with 7 French pilots in the top 9 WPRS, here is another good reason to write in english: time has come to let the universe be given the keys of performance in free flying (a smirking smiley should appear around here – be aware, I do not use smileys). 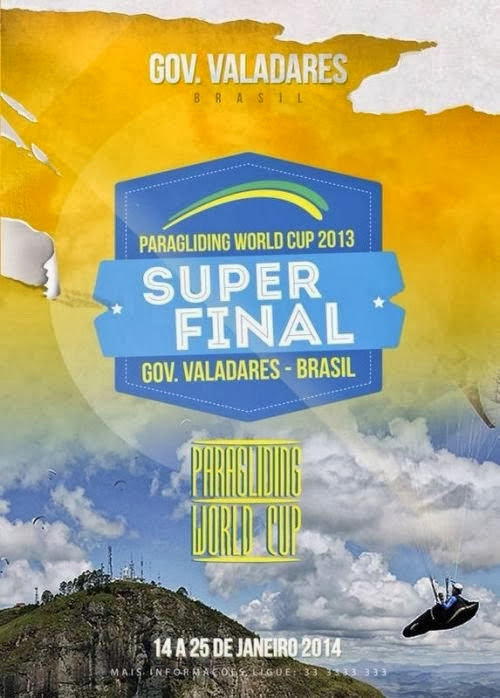 So here we go for the PWCA 2013 SuperFinal in Governador Valadares, Brazil. Exceptional circumstances are surrounding that event, even more for me. Before developing around this event and the 2014 season, let’s have a short glimpse over the shoulder while traveling to the site.

Since last September I have been hesitating to publish a 2013 wrap up. And I did rightly so (to hesitate). Until the very last day 2013 has been high in contrasts. The provisional title of my draft post was: « C’est la vie ». The title will stay, the rest I will keep for me. So, as a result of my production in 2013, here I am for the first time in the top 10 WPRS, the worldwide reference since PWCA migrated to SuperFinal format. With participation in 4 comps in 2013 and no cat1 event, I am pretty happy with this, honest.

During 2013 season I won the first task in Val Louron after 2 months without flying. And again the first task in Kopaonik after more than 1 month grounded. Now I have not flown since PWC event in Serbia last August. In December I purchased a new equipment, without a chance to simply inflate it before leaving to Brazil. That is the price of my freedom, respecting my personal commitments, but dear I hate going to a major event gambling on the equipment performance.

Last minute shift of site, new wing, new rules, personal issues… All in all, my target will be to keep my mind focused on flying, while flying and maybe on the ground too, because I can focus on one thing only – at best – for the time being whilst too many dark ideas try to occupy the front lobe of my brain. I could not have prepared the SuperFinal better. I should win the four first tasks in a row. Maybe the 5th as well. No? No. Let’s go on vacation, rest and enjoy some flying. That is my program.